What Light Wave Do Solar Panels Use?

Solar radiation is made up of electromagnetic energy of various wavelengths. As it passes through the earth's atmosphere, half is reflected back into space while the other half makes its way to the surface of the earth. The air molecules react with this incoming radiation, scattering the light and absorbing most of the harmful rays. The filtered energy is what see and feel as sunshine.

This article may contain affiliate links. When you purchase through links on this site, I may earn a small commission at no extra cost to you. 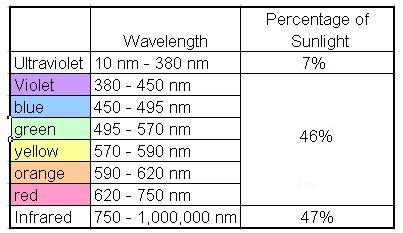 Solar cells are made out of N-type and P-type semiconductor material that use the visual light spectrum to generate electricity. Solar radiation with wavelengths of 380 nm to 750 nm (violet to red) strike the material with enough energy to knock electrons from their weak bonds and create an electric current. The unused wavelengths (ultraviolet & infrared) do not have enough energy to dislodge the electrons and are absorbed as heat.

Thin layers of amorphous semiconductor can be applied on top of one another. Each layer is specifically doped to take advantage of a certain wavelength. Light will travel through each layer until it strikes the appropriate layer where it frees one electron and makes an electric current. This stack-up makes use of all of the various wavelengths and holds promise to creating more efficient solar panels.

With existing solar cells, the unused ultraviolet and infrared wavelengths are not converted into electricity but rather wasted as heat. A recent discovery of a new semiconductor material made from indium, gallium and nitrogen can convert virtually the full spectrum of sunlight - from the far ultraviolet to the near infrared - into electricity. One panel can use the entire electromagnetic spectrum and holds promise of being the most efficient solar panel ever created.